How to Deal with High Conflict People 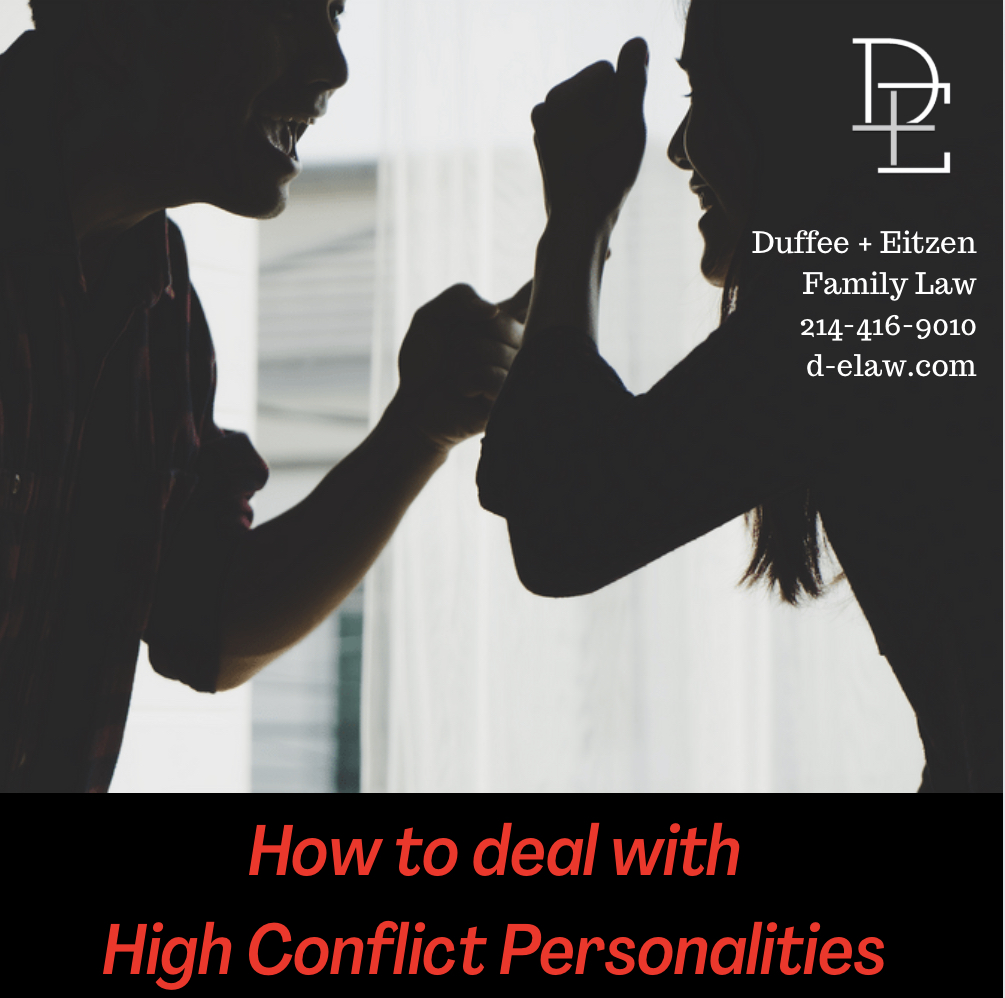 How to deal with High Conflict People

While holiday season is intended to be a joyous time, it can also be incredibly stressful. For some, the stress can be caused by daylight savings time, always just before the holidays, which can throw off our circadian rhythm and mess with melatonin production.  For others, the expectations and the reality of our holiday experiences are misaligned. And then, there are certain personalities that are not easy to be around- specifically, High Conflict People (HCP).

At Duffee + Eitzen, our attorneys are no strangers to conflict between clients and their spouses. We often recommend the book BIFF by Bill Eddy. Eddy is a lawyer, therapist, mediator, award-winning author, and the co-founder and chief innovation officer of the High Conflict Institute, based in San Diego. In great detail, he defines the traits of high conflict people (see below) and then offers useful examples of how to best handle people of this nature.

The odds are good that you know one or more HCP personally and/or professionally. If that is the case, do yourself a favor and order a copy of BIFF- we can’t recommend this book enough.

What is a HCP?

People who repeatedly use personal attacks are “high conflict people” (HCPs), because they lack the skills for dealing well with conflict.

Instead of sharing responsibility for solving problems, they repeatedly lose it and increase conflict by making it intensely personal and taking no responsibility. They are difficult because they are preoccupied with blaming others.  They speak Blamespeak: attack, defend - and attack again.

How do you handle a HCP?

To deal with high conflict personalities successfully requires a shift in how YOU think about them- so that you are clear about what NOT TO DO, as well as what to do.

HCPs have a repeated pattern of aggressive behavior that increases conflict rather than reducing or resolving it.

They tend to have a lot of:

To HCPs it seems normal and necessary to intensely blame others. They can’t restrain themselves, even though their blaming may harm themselves as well.

When problems and conflicts arise, instead of looking for solutions, HCPs look for someone to blame… with an all or nothing approach.  They become preoccupied with blaming others in order to escape being blamed themselves. (But you can’t point this out to them, because they become even MORE defensive.) Their language is what we refer to as blamespeak.

To HCPs, conflict often feels like a life or death struggle. This explains why it may feel like they are engaged in campaigns to destroy you or someone else. They feel that their survival is at stake, so they often show unmanaged emotions and extreme behaviors.

While the behavior of some HCPs stems from childhood abuse,  the behavior of others can be a result of being raised with a strong sense of entitlement and exaggerated self esteem.  In both cases, HCPs have not learned that their own behavior creates or worsens the conflict situations they are in. They can not see the cause/effect between their actions and how others respond to them.

They make no effort to change their own behavior when things go badly. Ordinary people are constantly changing their behavior as they learn from their experience and their mistakes.

HCPs put all of their energy into defending their own actions and shifting the blame to others.

The best way to handle a HCP is to disengage from the HCP’s blaming behavior- which will require changing your own behavior in order to change the dynamics of the interactions.  Bill Eddy has created the BIFF system to de-escalate HCP interactions.

BIFF was designed to protect you and your reputation by responding quickly and civilly to people who treat you rudely, while being reasonable in return.

We all know people like this. Bill Eddy is a master creator of simple to use tools for managing and de-escalating high conflict behaviors. He has published multiple books on the topic with specific examples and advice that is easy to implement when needed.  At Duffee + Eitzen, we often recommend the book BIFF by Bill Eddy to clients who could benefit from Eddy’s system, which you can learn about here—> http://bit.ly/3OibMUh

If you find this information useful, please consider sharing this post with others who might benefit from it as well.